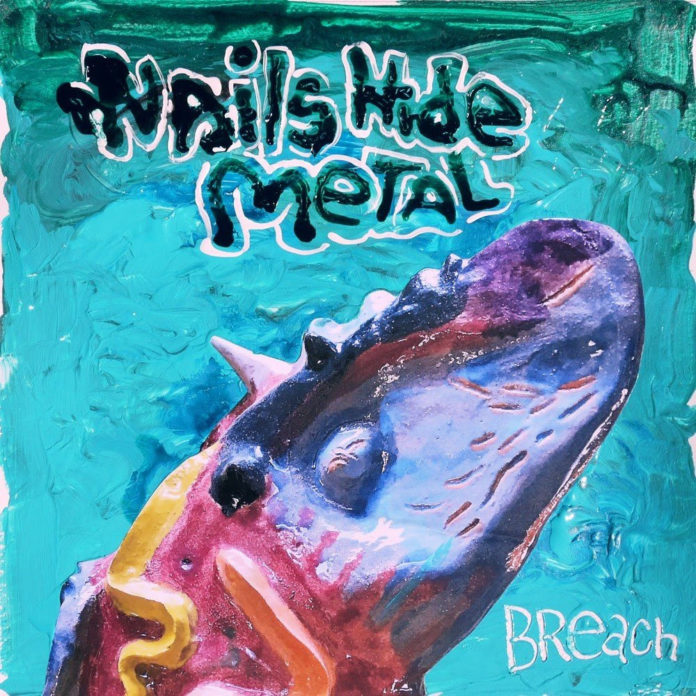 The searing guitar tonalities on Nail Hide Metal’s newest album ‘Breach’ provide a distinction within the saturation components with a nice tube-like low end that gives the riffs a vivid sounding melody.

The grungy dynamics possess a grimy element to the sound that engulfs all portions of the music in a charismatic choral epitome of music. Likewise, this sound contains fascinating guitar pitch bends and screeching slides that work in an agreeable manner without becoming repetitive or overbearing.

Each song his its own unique characteristics designated to the track itself while respecting the vision of the entire LP in context. The brute force nature encapsulates the spirit of energetic music from the 90’s that relished the parallel counter culture of the 60’s in a meticulous manner. The stimulating chord progressions develop through sharp/flat riffs that alter the music in a psychedelic whirly movement of sound that is congruent to the band’s creativity.

The ingenious songwriting is a facet that is often overlooked by superficial listeners but Nail Hide Metal’s possesses a sense of mastery that is nothing more than a rarity in the contemporary music industry. The abstract constructions pave an optimistic road of musical impossibilities consolidated into one fascinating piece of artistry for music heads to enjoy.

There is a sense of controlled demolition within the aggressiveness of the music that is both calculated and systematic to the band’s flora. This force will carry the momentum towards a prosperous time for multifaceted aficionados to relish.

You can listen to ‘Breach’ by Nail Hide Metal here:

Songwriters MeLinda Dalton and Russ Quinn are the creative team of Nails Hide Metal. With an extensive catalog of songs to their credit and with regular live performances, they continue to explore new musical directions. Rock guitars and drums drive their songs. Compelling lyrics, melodies and harmonies round off their unique sound.

The two began writing, playing and recording together in 2009. Three self-recorded EPs were released over the next three years. Two more followed after the couple recorded with Kendra Lynn and Larry Crane at Portland, Oregon’s Jackpot! Recording Studio. They continually find inspiration for new material.