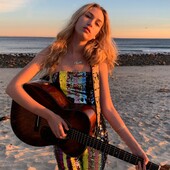 Check out the music review of the new single, ‘Morning Text’ by Trinity Rose

Trinity Rose is an artist with a focus on creating edgy indie-pop music with shades of R&B and Soul music. Recently, she unleashed a brand new studio track titled “Morning Text.” The song showcases some personable and edgy aesthetics, and it is actually dearly personal to the artist’s own attitude and experiences. In fact, the lyrics are about love games, and what happens with the power of attraction, and the feeling of being wanted, even if that feeling is not always reciprocated.

Trinity Rose has a unique way to express a sticky concept into a way that listeners can seamlessly relate to. Oh, and did we mention the song actually rules? If you like the sound of artists like Amy Shark, Sia or Halsey, don’t pass up on this one, which channels the freshness of modern productions, with the timelessness of genuinely great songwriting. Trinity has a distinctive voice, which matches the song’s distinctive indie-pop vibe and R&B influences.

Trinity’s vocals are upfront and expressive, soaring on top of the mix with so much clarity and depth. The beat is groovy and catchy, yet also quite laid-back. Find out more about Trinity Rose, and don’t miss out on “Morning Text,” which is currently available on the web. The track kicks off with a moody electric piano vibe, almost reminiscent of some of the later Ariana Grande productions.

You can check out the new single here

Multi-talented singer/songwriter Trinity Rose performed as the youngest female contestant on NBC’s “The Voice,” enthusiastically endorsed by Alicia Keys who proclaimed “Your voice is STUNNING” at the artist’s audition. She went on to complete GRAMMY CAMP, a prestigious program with alumni including Maren Morris and Billie Eilish. Trinity has performed for crowds larger than 25,000 people and is currently collaborating with Heather Holley, multi-platinum songwriter renowned for her work with Christina Aguilera.

Trinity’s latest single “Morning Text,” co-written with renowned rapper and Top 25 X-Factor contestant Steve Damar over tracks by producer Scar, is a soulful, hipster pop/R&B track she fondly calls her “Generation Z” song. She met Damar at LA on Lock Studios in Watts where she did an interview and the two immediately hit it off as creative collaborators.

“The song is inspired by real life – about someone being way more interested in me than I am in them and me not saying ‘no’ to the attention and the addiction of responding to texts,” Trinity says. “It basically stems from him giving me all this attention. It was super flattering but I was not that into him. I didn’t want to be mean to him, and then I realized I didn’t want to end the texting. In fact, I really enjoyed it!”

Truly one of the hardest working gigging unsigned young artists today, Trinity performs frequently at The Hotel Café in Hollywood, Gladstone’s and Rainbow Bar & Grill in L.A. Her 2019 duet single, “Miss You,” co-written by and sung with Netflix “The Umbrella Academy” star Aidan Gallagher, has reached over 1 million streams combined on Spotify, Apple Music & YouTube in less than 6 months. She performed a tour date with Gallagher last summer at Toronto’s The Hideout.

Trinity has been part of the L.A. Mayor’s Youth Council for Two Years and was recently appointed youth ambassador for Round Table Global that highlights youth who make a difference in the world. They nominated her to perform at The Compassionate Leader Summit with the Dalai Lama in 2020 for her charity, songwriting and work on a global unity song called “Love is The Only River.” She also supports local charity Rosie G Style for Cystic fibrosis. Her song won the world’s #1 songwriting contest beating out 19,000 other artists in the teen category. The single and music video has also been selected for several global film festivals this year.

“I think the vibe of ‘Morning Text’ is a lot of fun and different from what I have recorded before,” Trinity says. “Where some of my earlier tunes are darker, I like the easy bounciness and lightheartedness of this one. It’s just a fun contemporary R&B pop song. This is me developing and exploring other genres and discovering who I am as an artist. I’m excited to continue that journey on the new EP.”