Syne is an American Hip-Hop/ R&B, Nu-Soul recording artist based in Atlanta, GA. Born Timothy Doss of New Orleans, LA., Syne is an emerging Emcee with a fresh new sound coming out of the Dirty South. Born of Creole, Black and Native American decent, Syne knew that in order to make it into stardom he would have to put all his energy into his music and stage presence. Growing up Syne tried to avoid trouble in streets and at school so he decided to perform at local talent shows and venues in his neighborhood.

Syne first started coming on the scene in 2006, when he released a series of singles and mixtapes and underground sin- gles. The NoLa musician credits music legends such as; Jay Z, 2Pac, Luther Vandross, Frankie Beverly &Maze and The Jackson 5 as the musical influences that inspired him to write and create music. Now all grown up and doing his own thing, Syne is ready to take hold of the mic and bring something amazing to a new generation of Hip-Hop heads. Syne has shaken hip-hop fanatics with his versatile delivery and radical flow. His decision to blend into Hip-Hop music didn’t come to a surprise to his friends and family because he’s always had a strong love for music. Syne’s keen ear for music has to win several talent shows including the V103 Radio artist competition which he won and opened up for major acts such as; Lloyd, Sammie and many other popular acts at the time. 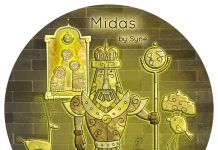