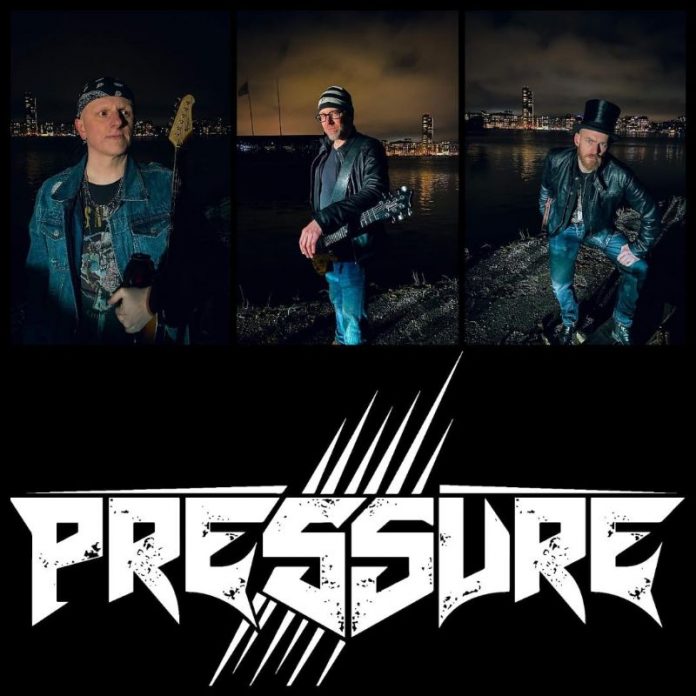 Pressure is a melodic rock band hailing from Stockholm, Sweden. With songwriter and lead guitarist Simon “Siirpo” Forsell at the helm, vocalist Olof Jönsson and guitarist Emil Salling lead everyday people around the world to overcome and embrace the pressures felt from everyday existence. Their lyrics famously show that there are two sides to every story – the good and the bad. Every song has a double meaning. Pressure wants their music to be used as tools to handle the different kind of pressures that surrounds us.

The lead singer Olof puts his soul into each and every word he performs, and he is backed up by the guitars intriguing melodies and heavy rhythmical sound.

The band began their journey together in 2018, and since then they have worked around the clock to build their unique sound and powerful songs. Pressure is always putting up a great show for you and their aim is to make memories and epic musical moments together with their fans.

A quote that can summarize their lyrics is: “How can you tell a story about life if you haven’t dared to live life to its fullest and take chances so you can say you have been there and done that!”. Pressure is all about every story, every moment, every Pressure!

In 2020, the band has been releasing their first Swedish singles and are translating their songs to English and German, gearing up for their upcoming album and getting ready for world domination

We are from Stockholm Sweden. A cold and dark place up in the northern part of the world! The origin for many stories.

I have been making music for all my life I think. But I have only played for 35 years so perhaps 30 years? I remember that my first songs that I wrote was very bad though. Haha, but I still have them. I never throw away music. I just lock it in my secret place!

Pressure has released 9 singles. I have been a part of some more but not my own music.

We are releasing our new album “Path Of A Shadow” it’s a concept album marking the beginning of the Story Metal genre. It’s a story about your life but told from your shadow’s perspective. You can not hide from your shadow. Wherever you go or whatever you experience, the shadow is right there by your side and sharing your life with you. He knows the truth but still never judges. This is his story, a story who will bring truths about your life to the surface, both truths that you didn’t want to share and some truths that you perhaps didn’t even knew existed. The Shadow is always around.

We illustrate the story by making the different milestones in his story as songs. The songs are in different moods and feelings depending on what they shall project. We use the power and energy of Story Metal to enhance the story.

I wanted to write this story because I have seen and listened to many different life stories. And one thing are always present. The need for someone to listen. I am collecting stories and I gladly do that, listen, but people feel alone and scared and not they strive their whole life to be noticed. I just want to give them hope and to help them remember that their Shadow is always with them, a representation of their guardian angel. Always around, always on your side.

There were never a choice for me. I have been playing music since I was a small child. And this was my way of expressing myself. I have found comfort in my guitar and I have found strength in my strings. I need music and my guitar to help me breathe in the harsh world. So I couldn’t choose anything else. The industry choose me!

What do you think of the current music industry?

I think that its hard for musicians to break through the noise. There is far too easy to release music. And a lot of the new releases are weak and badly done. And then there is a lot of really good music. But those bands, songs and styles drown in the flood. I would have liked for the streaming platforms to be able to pay the artists more. I would also like for I to be a bit harder to release or some quality control. And…I hope to be able to play live again soon. I mean both 2020 and 2021 has been a long waiting game. You can do live shows online but that’s never the same as playing in front of a crowd. I need that to connect.

I simply do not know that. It depends on style and what time of year, the industry and things shifts so fast. I want to be able to know more about the “big guys” in the business but well, its hard to keep up these days.

Many good musicians. I want to thank them all. You meet and collaborate with new people and you learn from them. Its very important to be humble and learn and share what you know with other musicians. That’s how you come one step closer to being discovered. So I don’t mention any names, all are equally important. Thank you guys

Well, I would like to say that we write about true things, in many different languages. We put a lot of thought in the whole picture, both the lyrics, the meaning and how to set the mood with the music. We also perform without a standard backline. We have no drummer or bass player in our lineup. Drums and Bass and SFX are controlled by our lead singer on a pedalboard. So we can play at any volume, on any size of stage for just 2 people or 20 000. That makes no difference for us. Every people are as important for us. We also differ because all our music and all our songs are based on our or our listeners own experiences.

Freddie Mercury! I would love to play with him! To have the honor of backing his amazing talent would be just a dream.

I don’t actually remember, I bought a lot of albums as a kid.

No one can hear you – Pressure. Of course! Hehe, well, ok if I cannot say ourselves then I want to say “En livstid I Krig” by Sabaton. A very hard and cool song.

No, just NO! I would sell a kidney first!

I must say “What comes around, goes around” I have found that to be true so many times. You will understand it after being in the world of music for a while. Its all about connections and networking. So when you get to know people and treat them well, that will come back in some way to you, but if you treat people bad, you will have a hard time to recover from it.

I love to take walks, talk with new people and meeting new friends. I also like the sea, and going out on the sea by boat. The sea always calms me down. I will later in life see to so that I live by the sea. That has been a life long dream of mine.

Thank you so much for talking to us. We, the band Pressure, wants everybody to be able to use our music as tools to handle the pressures around us that affects us each and every day. If you feel you have a story or if you want to us to do something on a certain subject. Please reach out. We are – Always Around!