ArtistRack has the pleasure of catching up with MjeSham for this exclusive interview and insight into his debut single titled ‘Da Turtle and Da Rabbit’:

MjeSham is a 25yr young Music Artist/Writer/Performer/Fashion Designer and Humanitarian from Atlanta Ga. Although MjeSham enjoys recording and performing music, by his own admittance, he reveals that music is not his first love, and that actually his first love is fashion. MjeSham attended The Art Institute of Atlanta for fashion and clothing design directly out of high school;but feeling that they weren’t really offering what he expected, or meeting his expectations as a school, he moved on from there and started his own (Signature Clothing Brand) rightly named MjeSham. MjeSham distributed his brand himself which included several different custom designs. After doing that for a while, and being as creative of a creator that MjeSham is, he started to dibble and dabble in writing rhymes, and songs with his younger brother (Realize Jay) who is also an artist on Gaistabank Ent. They teamed up together to come up with a banging street hit called “Da Turtle & Da Rabbit” which incredibly became MjeSham”s debut single release. MjeSham has the belief that he has more to offer the world than just music. MjeSham says he wants to bring music, fashion, style, and cool back to the hip hop culture; And truly, and honestly believes, that he can do all of this, while still spreading Love, and Peace to All. So fasten your seatbelts, sit back, and prepare for the ride of your life. As you enter into a mind of one that you may never grasp, comprehend or understand, we would like to say welcome to all, Welcome To The World of MjeSham!

This is my very first official release of many, many, more to come.

Basically the background behind this song comes from me going deep within myself. I seen glimpses of the past and future. So I just mixed it all together. Da Turtle and Da Rabbit really kind of fits where I am with everything right now.

Fashion is my first passion, But I’ve always been pretty good at rhyming and creative writing so music just comes to me naturally. I’m an artist, so I see things a little differently. To me music and fashion goes hand in hand.

It’s okay, I feel it’s not enough uplifting music in the industry. In my opinion there has been enough music about tearing down, now it’s time to build up.

There are many that I have enjoyed over the years, but at this point in my life now, I would have to say Drake, Kanye, and Future.

I haven’t collaborated with anyone at the moment; But that’s about to change very, very soon. IN A BIG WAY!

I try to differ from other artists, I’m not telling you how I’m gonna kill you, or how I’m going take your girl. I’m trying to spread peace and love while building confidence within with my lyrics. That’s just who I am.

That’s a good one. Dead would have to be Aaliyah and myself. Alive I would say Lil baby,Gunna,and Myself.

The first album I ever bought for myself would be “Get rich or Die trying” by 50.

Da Turtle & Da Rabbit. This release is special and dear to me.

“The journey of 1,000 miles begins with a single step.” That one really holds truth with me.

Yeah I have a few tatts and my ear piercings.

This new project is basically like my affirmation/manifestation. I’m attracting everything that I want with my lyrics. My upcoming projects are going to be very different from what people are use to listening to. I’m looking to reach the soul of those who are gifted and just need to be uplifted. Believe it or not, there are many, many, many of us out here

After this project I see myself making much more music, and expanding the “MjeSham” brand” globally; with such things as clothing, jewelry,shoes,etc… the whole music meets fashion thing, you know.

Most definitely. Thank you for providing me your platform, and giving me this opportunity. Peace and Love to All. 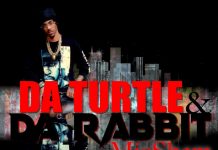