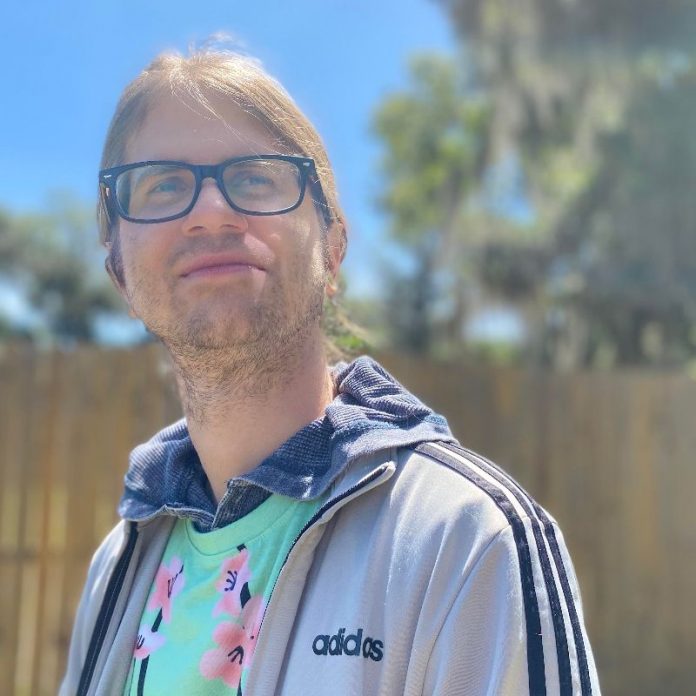 I’m the Synthwave artist known as Late Drifter. I love the music from classic 80s movies and tv. I try to relive those memories of the 80s and early 90s. I spend much of my free time making music and listening to music, reading comics, and watching movies. My life is one long art project!

I’m from Bradenton, Florida in the United States.

I have been writing music for about a year now but music has always been a life long passion. My 6th birthday gift was a Casio keyboard and beginner sheet music for Beethoven.

My latest release is, “The Road Out of Hades”. The album starts off with “Harbor Ride” a smooth saxophone lead adventure. This album came out of a request from a friend to make music to use on his racing channel. Little would we know that a global pandemic would set in during the middle in production. This definitely sets the tone for the rest of the album.

I had always had an interest and passion for music but I hadn’t taken the steps to write my own music until a year ago. I guess it’s one of those midlife moments you have in your 30s, where you ask if you’re happy with where you’re going. I took a crash course in music theory, sat down, and started to channel the best moments of my life into song.

This is probably the most exciting time to be in the music industry. We can’t have in-person concerts for a while so we’re heavily reliant on streaming and social media. It’s really allowed me to get personal with my fans and find out what sounds they really like the best.

If we’re talking 2020, it’s clearly Billie Eilish and her brother Finneas. I haven’t seen the musical teamwork they have before. Her vocals are very interesting and they sync really with her music.

I have yet to collaborate with another musical artist on a released song. I’m definitely open to collaborating with other artists. Sounds like it would be fun!

There is definitely quite a selection of Synthwave artists out there. I greatly differ from other Synthwave artists as I’m not trying to channel an idealized version of the 80s. There are definitely many Synthwave artists that make music in the genre that weren’t even born in the 80s or even early 90s. I was born in the early 80s and vividly remember the late 80s, particularly the Fall of the Berlin Wall. The experiences I have show in my music.

I know he doesn’t make Synthwave but I’d love to do a collaboration with Dillion Francis. I listen to his music when I’m trying to vibe to write music. He has a fun comical style that I love to include in my own music. His music videos are extra fun. I tried to channel some of that in the music video for an older song “Drive”.

First album I ever purchased was “Marilyn Manson – Portrait of An American Family”. This was back when music was only on a physical medium and MP3s weren’t as widely available. I went to a record store that would sell records with “explicit lyrics” to whomever. My mom still doesn’t know. Ha!

Bebe Rexha – Call You Mine

Wow, that’s a nightmare scenario! It would have to be “Marilyn Manson – Mechanical Animals”. It was the first hard rock album that someone ever gave me.

Read comic books, watch cartoons and movies, listen to music, and gardening. I’m addicted to growing pineapples in my backyard!

I have seven tattoos. The phrase on my left arm is in Russian, it means “I’m still here;” My ears are pierced and gauged out to 00g, along with both conches. My septum is also pierced at a 10g.

My current project is playing and trying to perform “The Road Out of Hades”. I play on getting set up to do live streaming concerts from my studio. I’m really trying to get out there and get my music out there. The more time I spent doing music, the largest this industry seems.

Without saying too much, I’m planning a Synthwave Halloween “Spooktacular” album. The idea is to do something with a blend between the “Rocky Horror Picture Show” and every classic 80s horror movie combined. It should be fun times!

Thank you so much for your time! It’s been great talking and I can’t wait to hear from everyone. Check me out on my social media and Spotify!