ArtistRack brings to you the visuals for ‘F**k Golf’ by gv.grace:

Genevieve Dymond of the synthpop band gv.grace is tremendously videogenic, and together with her partner Griff Dymond, she’s already made a series of creative, provocative music videos: the colorful, hallucinatory “Only You”, for instance, and the intimate “Mai Love”. These independently-made clips have demonstrated that Genevieve Dymond is an entertainer who understands her own sex appeal – and who knows how to showcase it. But for their new track, “F**k Golf”, they’ve turned to innovators Elise Mesner and Michael Atallah. Mesner wrote the video concept, and brought it to life together with Atallah. Together, these uniquely talented artists have used their impressive global craftmanship to create a clip that’s salacious, delicious, irreverent, and humorous. Oh, and it features some of the most inventive uses of Astroturf we’ve ever seen.

It helps that “F**k Golf” is such a great track. It floats in on a cascade of synthesizer arpeggios, and it’s driven along by a whip-crack beat and Genevieve’s seductive, half-spoken vocals. It’s just the latest in a string of intoxicating singles from the duo, and their first new music since the release of the mesmerizing Heaven Mouth EP earlier this year. Though that EP contained a mere five songs, it brimmed over with musical ideas, and it strongly suggested a broad artistic background and a range of influences beyond those typical for synth-pop bands. Before they moved together to Los Angeles, Genevieve and Griff were part of two beloved Denver groups: Genevieve sang with the indie-folk orchestra Paper Bird, and Griff fronted the dream-drenched art-rock project Inner Oceans. It’s fair to say they’ve filtered everything they’ve learned from those experiences through their analog synthesizers and come up with something even fresher and bolder for gv.grace.

Genevieve is the star of the “F**k Golf” clip, but she shares the frames with some gorgeous friends, wide swaths of grass, and a handful of balls. Sometimes she’s clad in skimpy costumes made of a thin layer of artificial turf, and sometimes she’s dressed in… well, you’ll see. She crawls through a tiny model town, sings to the camera covered in grass clippings, and lets her body provide a tee for a pair of ardent middle-aged golfers. This is the collision between burlesque and the PGA that we never knew we needed, and it’s all done so effortlessly that you’ll wonder why all golf tournaments aren’t as sexually provocative as this one. 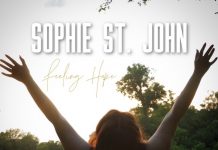 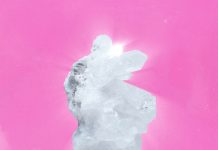