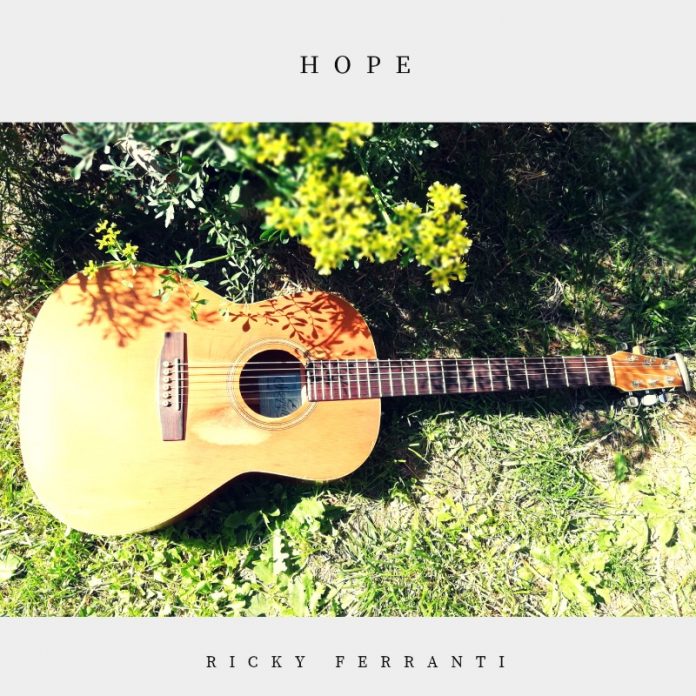 Check out the music review for the new release by Ricky Ferranti titled, ‘Hope’

June 2020 – Ricky Ferranti is an artist and songwriter with a penchant for beautiful instrumental music. The sound of his releases is incredibly personal and expressive, giving the audience a deeper insight into his compositional skills and ability to set the bar higher in terms of vision and creativity.

The artist’s most recent EP, “Hope,” is filled with beautiful acoustic composition, in the vein of guitarists such as James Taylor or The Tallest Man On Earth. The title track is a beautifully articulate piece, with amazing arpeggio and tempo shifts making it all the more organic and emotional. The following track, “Attimo,” is bright, soothing and dynamic, tipping the hat off traditional folk melodies. On the other hand, “Fly” has a more atmospheric feel, with more effects in the background and some electronic sounds to add more texture. “Arise” is a beautiful composition with double-tracked guitars, giving the audience a warmer vibe with a guitar that sounds like a Nylon strings model. Last but not least, “Empty Streets” returns to the steel strings, going for a fast-paced set of beautiful arpeggios.

Riccardo Ferranti was born in Piacenza. He started playing keyboards and organ and then he moved to guitar. He took his first lessons from Claudio Bongiorni and Silvio Piccioni and then he joined the CPM where he graduated with Donato Begotti, Pietro La Pietra and Bebo Ferra. He studied advanced harmony with Tommaso Lama and piano with Alessandro Bianchi. He attended the Jeff Warren class for horn arrangement at the Modern Music Accademy where he studied vocals as well with Emiliana Cerri.

In 1994 he won “Emerganza Chitarre” and “Jimi Hendrix Tribute” in 1995. He released several didactic VHSs and DVDs with Playgamemusic and Carish. He also joined Franco Mussida (PFM) in a didactic course for Fabbri Editore.
In the year 2001 he produced the album “Feel the blues” with a trio called Psycho Train and then in 2002 he joined the band Animali Rari whose single “Già colpevoli” is part of the soundtrack for the italian movie “Va dove ti porta il cuore”. With this band he recorded the albums “Stagioni”and “Sottosopra”, followed by the live album “Anima live” recorded at the Fillmore in Cortmaggiore (Italy).

In his career he played with Fiordaliso, Smaila, Faletti, Grignani and Paolo Meneguzzi, following this last one in several TV programs as well. In 2010 his deep love for blues music brought him to give life to Ricky Ferranti & the Rusty Miles, a rock blues project based on covers and original songs. This progect evolved into the album “Rusty Miles”.
He recorded “Space Trip” 2018(Radiocoop) , “Al Mondo” 2019(Radiocoop) , and the EP- “HOPE” 2020 (Radiocoop).