Johnny Wvlker takes on 2020 with his fresh single, “Visions”

In this track, Johnny Wvlker combines the creative spontaneity of Kanye West with the nuanced detail of Pink Floyd. His direct and politically loaded performance is reminiscent of the likes of rap artists such as Tyler, The Creator, and Kendrick Lamar, to mention but two leading figures in the hip-hop scene.

“Visions” kicks-off with sound bites from news broadcasts covering the pandemic and the political and social turmoil in the United States. This strong introduction to the song is chilling, and it immediately immerses the listener into Johnny Wvlker’s captivating flow.

It’s rare to come across such a politically active artist who has an empowering voice. “Visions” is a visceral and thought-provoking single that showcases the raw talent of Johnny Wvlker.

Check out the pop-art inspired music video for “Visions”, which already has almost half a million views 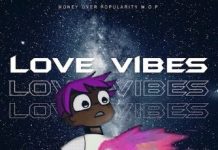