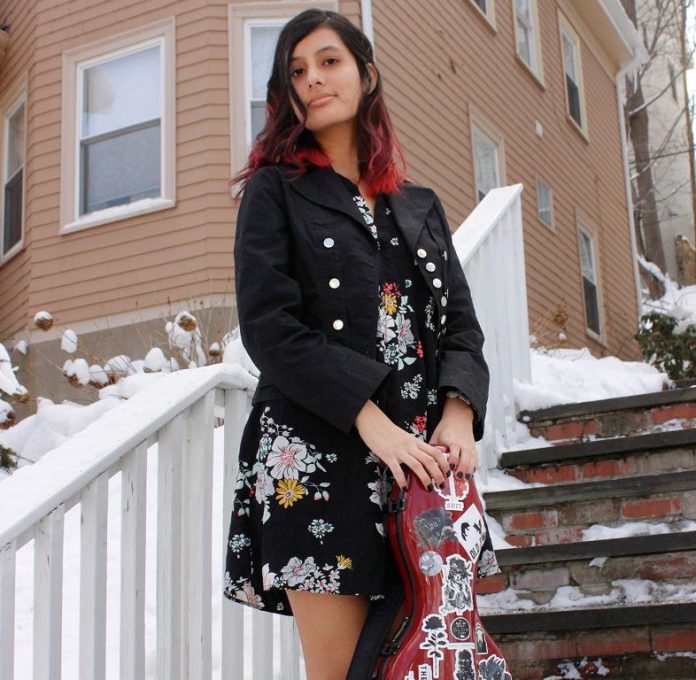 Claudia Lee Horna is a violinist and film, TV, and media composer. She attended the acclaimed Berklee College of Music with a scholarship and recently graduated with a degree in Film Scoring and a minor in American Roots Music.

Hailing from Peru, Claudia began her musical journey on the violin at a young age. She studied in the Youth Program of the Conservatorio Nacional de Lima, building a strong orchestral and classical foundation. In tandem, she grew passionate about stories told through the animated medium, leading her to discover film and video game music and pursue a career in media composing.

Her studies led Claudia to Boston, finding herself a musical hub of diverse styles from around the world and be inspired by music bringing multiple people together. As a result, she has been inspired to learn as many musical styles and traditions as possible to incorporate into her own compositions and playing and advocate for cultural collaboration in the artistic scene.

I was born in Lima, Peru, where I’ve lived my whole life until I moved to Boston four years ago. It was quite a change I must admit.

Believe it or not, I have been playing the violin for around 12 years. It started with local classical concerts as part of my school’s and the National Conservatory programs, but as I grew up I also started learning some traditional Andean music. Learning new styles while still continuing my classical education led me to perform outside of Peru in countries such as Colombia and the Netherlands as part of string groups that promoted Peruvian music around the world.

I think it was a combination of delving into non-classical genres and paying more attention to the music in my favorite pieces of media that led me to explore film scoring as a musical path and start composing to picture and tell stories through my music without being necessarily restricted to one genre, but instead draw inspiration from different styles in such way that I can make the music better fit the story.

Of course, this means learning new styles in order to respectfully and accurately draw elements from them. I have been very lucky to collaborate and learn from many wonderful musicians and composers from different parts of the world who have been so kind to share their knowledge and musical traditions with me.

I’m actually currently working on putting together my first EP! It will be the first project where I release a compilation of my own selected compositions and arrangements for strings inspired by several music traditions.

Additionally, up to now, I have been lucky to compose the soundtrack for a couple of short films and animations, as well as play violin on several singles and albums from indie artists. It’s fun being able to compose and perform and not just sacrifice one for the other.

That’d be a piece that I did for an animated short called Blooming Cycles. The short was made by Allison Power, an incredibly talented animator and through this film, she paid homage to the Women’s Rights Movement from the 1890s to 1960s. We had a couple of meetings before the pandemic hit in 2020 where we talked about what she really wanted the music to portray. We settled on having a primarily Rock vibe with a few psychedelic elements to accompany the pace of the film, eventually building up to the end of the short, as a lot of women ride their bicycles towards the sunset.

Attending Berklee was a big step. Being a violinist allowed me to be part of many productions and recording sessions, where I got to meet many musicians and composers who also were opening to collaborate and jam.
After that, it was a matter of keeping both eyes on new opportunities and giving 100% to all your projects so that you get called back for more.

What did you think of the music industry in 2020?

It certainly faced many challenges in 2020. But I am amazed at how much music has been able to persevere, despite all. While I cannot wait to go back do playing music live and in person, virtual concerts and livestreams are a godsend during these times and I don’t think they will go away even after we can do large concerts again. Overall I think that especially after this past year, technology will play a larger role in the music industry; both from a practical and creative standpoint.

As a violinist, I’ve been lucky to share the stage with musicians from all over the world and play in different genres of music, from traditional Peruvian music, Flamenco to Old Time and Gypsy Jazz. Additionally, I’ve been able to play as a soloist and as part of string orchestras for award-winning composers and independent artists.

As a composer, I get to collaborate with artists in mediums outside of music, such as dancing and of course filmmaking. I’ve also been able to work with active composers in the music scene and learn from them, which is very rewarding and exciting to do.

While usually I think melodically when composing, I also take influences from different musical traditions and styles which have shaped my musical voice over the years. As a result, I create a unique sound that takes inspiration from multiple styles to tell a story. Additionally, I tend to create my own textures through sampling and sound design that I implement into both my violin playing and compositions. I would say that my strong drive for experimentation with several genres is a big aspect that makes me seek my own sound, both musically and texturally.

I would love to collaborate with the Silkroad Ensemble; be it performing, composing, or both. I found out about the ensemble within my first few months in the States and its mission to promote cultural collaboration through the arts resonated with me deeply. The ensemble is really one of my main inspirations to advocate for collaboration in the Art scene. Also from a musical standpoint, this ensemble combines multiple genres in such ways that create something beautiful and it would be both an honor and dream for me to be able to collaborate with this ensemble.

The How To Train Your Dragon Soundtrack. I was doomed to be a nerd from a very young age.

I’ve been listening to a lot of Broadway soundtracks lately and I haven’t been able to get “Satisfied” from Hamilton out of my mind for about a month. The song is masterfully written and sends me chills every time I listen to it.

While I adore making music and working on composing for different forms of media, sitting down and watching cartoons or playing video games just for the sake of entertainment is very relaxing, and addicting.

I’m working on releasing an EP with my original compositions and arrangements in different genres of music such as Classical, Brazilian and Old Time fiddle. It has been a lot of fun to write the pieces and I am looking forward to finish composing and start recording too.

To keep scoring and performing! There’s always a new scoring or recording project coming along and I enjoy collaborations a lot so I’m definitely going to keep working with fellow media creators and musicians to create new music. I am also looking into getting more involved in the arts administration area so that I can help and support organizations that seek to promote the arts and collaboration.

Thank you so much for the interview! I am so glad there are platforms that seek to promote musicians no matter what stage of their career they currently are.