Carolyn Marie, the dynamic new rock inspired singer-songwriter, just released her debut EP Backstage Pass. As an independent artist, Carolyn has quite literally opened doors for herself. Her unstoppable enthusiasm and exacting nature led her to seek out and work with top industry professionals such as multiplatinum and Grammy award winning producer, Earl Cohen, and EMI/Sony ATV producer, Synematik. When Carolyn wasn’t in the studio writing or recording she was attending Mason Gross School of the Arts at Rutgers University full time, juggling her full-fledged music career with the rigorous demands of the dance conservatory program where she earned her Bachelor of Fine Arts in Dance from the University in May of 2014. She was nominated for “Outstanding New Band/Soloist of 2014” in the Lehigh Valley Music Awards (LMVAs), was a finalist in RAWards for “Musician of the Year” representing New York City and her song,” Surrender”, from her EP Backstage Pass was awarded finalist in the prestigious US Songwriting Competition. Another song from her EP, “Take Back The Power”, Carolyn’s collaboration with inspirational icon Eric LeGrand , attracted major media outlets across the New York metropolitan area like Fox 5 o’clock news, NBC10 Philadelphia, NJ.com, Magic 98.3, and many more creating major buzz and anticipation for this powerful and motivational anthem. Carolyn Marie is determined to turn her childhood dream into an empire, one record at a time.

I have been writing songs and recording music for the past three years, but my passion to express myself has been a part of me since I learned to write and dance. I still have journals from when I was a little girl with lyrics to songs and poems I was writing. It’s funny, but at the same time a little sad to read entries where I was writing from a time of hurt. I just wish I could go back to my younger self and say “Don’t worry, you’ll be alright!” It also made me aware of how deeply a child can feel about something that we just brush off which has definitely helped me understand children better when I’m teaching dance or voice.

I have released quite a bit of music up to date that I had taken down. I was experimenting and trying to find my own lane in this very saturated music industry. I’m very proud to say that my most recent release, my debut EP – Backstage Pass, is what I want the world to know as me, Carolyn Marie.

When I started writing Backstage Pass, I had recently went through a heartbreak and was also being singled out at college for following my dreams and trying to make a career for myself in music. I put the songs on Backstage Pass in the order they were written. Surrender, is an anthem against people trying to crush your dreams, and learning to love and embrace others differences. The Moment is about how even though the person you once loved is not in your life anymore you can still cherish the good times you had together, and the third song, “Our Favorite Song” is summer with the friends, getting over lost love, and moving on! The last song, my collaboration with inspiration icon, Eric LeGrand – “Take Back The Power” is about believing in yourself, not giving up, and fighting even against overwhelming odds. Looking back on the whole record, you can see and hear the struggle through the break up from beginning to end and how I found my positivity and confidence after being bullied.

While I was in college for dance my ballet teacher asked me to audition for a musical that would be performing at New Jersey Performing Arts Center over the summer. I got in, and did the same the following summer. I loved being able to sing, dance, act, and perform to an audience, but something was missing. I couldn’t write or create. I was given a character and told to play that role. I wanted to story tell and share my life experiences through my dancing and singing. That’s how I ended up in the music industry. I wanted to create my own show.

What do you think of the music industry in 2015?

Although most think the music industry is plummeting because of poor record sales and artists are finding it harder than ever to get a record deal, I think we are in the best position to be independent artist today. There are so many social media outlets and niche markets for artists with tons of listeners. If you are willing to invest in yourself and your music, you can have a huge career without a label and be true to who you are as a person and a musician. This will eliminate the artists who aren’t genuine and are just in it for the wrong reasons like fame and money, and not because they are passionate about music.

This is such a hard question. I love so many different artists for so many different reasons so to pick the most influential artist, in my opinion, is impossible. I love Taylor Swift for her lyric writing ability and her connection with her fans, Joan Jett for her rock n’ roll, I don’t give a f*ck anthems, Lzzy Hale from Halestorm for her powerhouse vocals. It’s so hard for me to pick, but I’ll go with these three ladies.

I have collaborated with rapper, Whitney Peyton, on her single “Better” as well as inspiration icon, Eric LeGrand on my song “Take Back The Power” which is the next music video I will be releasing. It’s been a while in the making so I’m incredibly excited for everyone to see it!

I believe I differ from other artists because I’m not only passionate about music, but dance and other aspects of the entertainment industry as well.

Joan Jett, she’s such a rebel child and I love to rock n’ roll!

The first album that I asked my lovely parents to buy me was probably Baby One More Time by my girl Britney Spears. She’s one hell of a dancer!

My “favorite song” at “the moment” is “Our Favorite Song” and “The Moment” off my debut EP – Backstage Pass! Sorry, I had too! But right now I’m really into New Romantics by Taylor Swift.

I teach dance and voice full time so I’m always being super creative. I pretty much live the entertainment industry on a daily basis. It’s okay though, because I am so in love with it all.

I only have my ears pierced, and I had to beg my Dad like crazy to let me get them done when I was in forth grade. My Dad would be way too upset if I ever walked in with a tattoo, haha!

My next project that will be releasing soon is the Take Back The Power music video feat. Eric LeGrand. It’s been long in the making, and I’m hoping to inspire others to believe in themselves.

A full length album… That’s all I can say!

Thank you so much for giving me this opportunity to share my story with your readers!
With love,
Carolyn Marie xx 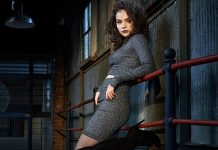